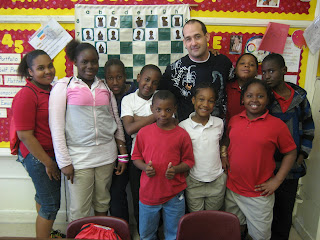 These Rooks rule when it comes to chess
BY NICHOLAS SPANGLER
School was almost over and with it the Edison Park Rooks' season, which had, all things considered, been pretty great.
The trophy corner in the elementary school's upstairs library is stuffed: one national title, a couple district and regional championships that paved the way for fifth place at the Florida Invitational Super Stars tournament and sixth place in the Open Division at states.
But this, as Mr. Charles pointed out, was no reason not to practice.
So here were the Rooks, sitting at the little desks in Mr. Charles' art room at 4 p.m. on a Tuesday afternoon with chess sets out and pieces clicking.
Some of them are going on to sixth grade next year, cause for concern for any sane fifth-grader. And if that fifth-grader uses a lot of SAT-style words, doesn't care for sports of any sort and plays an ancient board game three hours a day?
Ooof.
''Torture,'' said 12-year-old Milton Canton, the Rooks' No. 1.
''Don't remind me of the dreadful day,'' said his best friend, Woody Jean-Louis, 11.
''I don't know the place as well as this school,'' said Luis Delacruz, 11. ``And my friends -- I don't want to lose them.''
There was quiet for a while, as Sicilian Defenses developed and pawns sacrificed for the greater good. Milton leaned low over his board, slammed the queenside rook to the back rank; newspaper reporter beaten, he lost interest and looked around for fresh meat.
IN SHADOW OF I-95
Edison Park sits on the edge of Liberty City, in the shadow of Interstate 95. In FCAT parlance, it's a ''C'' school. Its students scored below the county mean in every subject test in every grade.
Rooks parents work as hotel maids, tow truck drivers and security guards, with a couple teachers and nurses thrown in the mix. Nine of every 10 Edison Park students receive free or reduced lunches.
Most who don't move away or get into one of the magnet schools will one day matriculate to Miami Edison Senior High, site of what was practically a pitched battle between students and school police this year.
You probably heard about that.
You probably didn't know the Rooks won all those titles, or that Milton placed seventh out of all the 250 players there.
All of which, of course, keeps Webber Charles on a slow burn. Mr. Charles is 28, teaches art, has tattoos down both arms and drives a silver Porsche. He loves diagrams, fork-pin-deflect lectures and winning, and has a sense of social justice fine-tuned by five years in the Miami-Dade public school system. ''There's only acknowledgement when negative things happen in the community,'' he said. ``There's a perception that these kids can't learn no matter who you put in a classroom. I disagree totally. If we get the same structure, the same resources, you're going to get results.''
So Mr. Charles and the chess team have gone high-octane, like a big-time athletic program. The school system doesn't have the resources to fund a top-level chess program -- not after this year's budget cuts -- so he's raised money from private and public charities and plain old rich people.
UNIFORMS AND TRAVEL
''My kids have three sets of uniforms,'' he said. ``They have chess clocks . . . When we travel, they eat well, there's laundry, everything's provided.''
The 16 boys and girls he coaches are ''the cream of the crop,'' signed on to the team only after aptitude tests and interviews. He reviews grades and FCAT scores and looks hard at kids in the gifted classes. But good grades don't correlate with chess ability. And the recommendations from teachers who don't play chess, in Mr. Charles' experience, tend to be ``delusional.''
''A [chess player] has to be creative, have great spatial sense, and almost a rich sense of social experience,'' he said. ``The kid who roams the streets may be a better chess player than the standard student because that kid has to make decisions on his own all the time.''
Some of the best -- like Milton -- aren't selected at all. He forced his way onto the team by practicing on his own until he could beat the coach.
There was one practice left to go, so there were no hugs or goodbyes this day. But the future was looming. It's always there. For Mr. Charles, it's roster woes: He's losing eight fifth-graders, the team core, to graduation.
''I don't think I'll be able to duplicate what we had this year -- not those kids,'' he said.
Milton was just getting used to the perks of semi-stardom. ''People are treating me differently, like a champion,'' he said. ``Some are being friends with me now.''
He'll have to start all over next year.
At least Woody'll be around. ''It's not that sad,'' Woody said. ``I really want to have more adventures.''